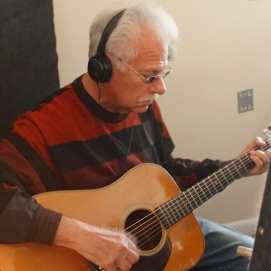 I am named for my great uncle Lipa Feingold who was a composer in the Yiddish theatre. Music was a big part of my childhood. My parents had a Granco stereo and loved Frank Sinatra, Nina Simone and other greats of the time. It was a celebration when my Dad bought a new record to play on the turn table. My parents loved to dance to big band and swing music. At age seven I was given guitar lessons on a rented harmony F hole arch top, from a jazz guitarist who gigged in the West Village on the weekends. My cousin Ruthe was dating a guy from the Kingston Trio.  I attended University Settlement House summer camp (for under-privileged kids) in Beacon, New York, where folk music was king. Pete Seeger would entertain us campers two nights a week, and famous folk artists routinely came by to visit and play; people such as David Grisman, Bill Keith, David Bromberg and others. Dawg lived down the block, and Ralph Rinzler’s aunt was my English teacher. I learned to play basic folk music material and was intrigued by the meaningful lyrics and beautiful melodies. As a teenager in the sixties, I hung out in the West Village at the height of the folk music movement. In particular, my fondest memories take me back to the Folklore Center where folkies came to gather, discuss politics and music, and sat at the foot of Israel (Izzy) Young who published Sing Out Magazine, and mentored us youngsters in his ways. Izzy took us under his wings, and eschewed the electric movement as a nail in the coffin of acoustic folk music. Izzy hired our high school jug band Stagnant Eagle and the Strangebirds, to open for Rosalie Sorrels. Catching a show at the Bitter End, Gaslight Café, or Village Vanguard was high on my list. Just one floor away from the Folklore Center, was Fretted Instruments, owned and operated by Jack Baker. On the wall were these used instruments from the 30s and 40s, with names like Martin and Gibson. I really wanted a new guitar, as a used instrument wouldn’t do. My father saved and saved and bought me a new Gibson LG-0 sunburst. This began my fascination and obsession with acoustic guitars. I’d walk around Manhattan peering into the store windows drooling over new Martin guitars. I’d stop at Whitey’s bar where they’d serve you if you had the money, to gain the inner warmth and strength to brave the New York City winters.

Onto 1970, when I moved to Tallahassee, Florida, without a guitar or much else. My girlfriend Audrey Scott (we’re now married 44 years, with a 32 years old son Scott Harrison) knew I loved guitar and bought me a classical guitar from Mexico. We’d sing songs by the Beatles, Simon and Garfunkel, James Taylor and many others. We were invited to a pickin’ party at Chuck Lamb’s home in the woods of Leon County. With guitars, fiddles, banjos, mandolins and bass all playing “Flop Eared Mule,” I was immediately hooked on this music they called bluegrass. Now I’d heard Jim Kweskin and the Jug Band, and the New Lost City Ramblers, before, but nothing like this live improvisational stuff with the right combination of instruments. I re-discovered Doc Watson, became fascinated with Norman Blake, Dan Crary, and this guy Tony Rice. I studied Rice material from his audio tape and tab series. I earned spots as the guitar player for Centerville Express, Canopy Roads and then the Bottom Dollar Boys, a local bluegrass group and played with them for over 30 years, at festivals, fund raisers, parties, Bed Races and the like. During that period of time, I became more entrenched in the Rice style, and took lessons from Wyatt Rice, the youngest of the four Rice brothers. At a festival we were playing, I met Mark “Clawgrass” Johnson, and we became fast friends. He invited me to a jam at Larry Rice’s home, and I was in awe. Over time, Larry and I developed a friendship and played gigs together, one of which comes to mind- The National Square Dance Championship in Daytona Beach, Florida. We were Max Tillman and the Bluegrass Boys, with Max, Larry, Clawgrass, Mike Jett and me. Larry and I conversed all the time, but there was a period he was somewhat underground.  I recall Tim Stafford telling me that Larry had been suffering from mesothelioma, and that he might benefit from help from the bluegrass community. It was my honor to coordinate the Larry Rice benefit, at the Moon, in Tallahassee. We called it “Legends and Locals for Larry,” but it was more like a Rice family reunion. The Tallahassee and national bluegrass community came together and we raised over $40,000 to help with Larry’s numerous medical expenses. Laurie Hills took some beautiful photos, especially one of the four Rice brothers, which was included in Time Stafford’s and Caroline Wright’s book, “Still Inside-The Tony Rice Story.” Larry wanted to continue playing, so we formed the last version of the Larry Rice Band, including Larry, Uncle Frank Poindexter, Ronnie Hatley, Carrie Hamby and me. We played several gigs in the southeast, including Randy Wood’s Pickin Parlor, and a benefit for the homeless shelter in Tallahassee, again featuring The Rice brothers. Larry seemed to be close to remission, but due to radiation and chemotherapy, he was immunosuppressed and in bad shape. He died surrounded by family.  Along with other close friends, I spoke at Larry’s funeral. That was a sad time for the Rice family and many friends. A scrapbook of his benefit has been carefully maintained. The September 2012 issue of Bluegrass Unlimited had an article on Larry, “Keeping the Lamp On,” which I was proud to have authored.

My career was in exceptional student education, with a Masters from Florida State University, and I’m a Seminole through and through. As I started phasing myself out of my work as a consultant for programs for students with disabilities, I evidently missed writing, so I decided I would write about one of my passions- bluegrass musicians and the music. To date I’ve written articles for Bluegrass Unlimited, on Ken and Virginia Miller, Wyatt Rice, Larry Rice, Uncle Frank Poindexter, Spencer Strickland, Church Sisters, Deeper Shade of Blue, Max Tillman, Henry Rutland, Fred ”Butch” Burns, Randy Wood, and Carl Jackson. My next article will be on Ron Rice.

I’ve seen first- hand and benefitted from services provided by non-profit organizations, and my family members have as well. Through an informal group of friends, called, “Heart of Bluegrass,” we’ve sponsored bluegrass music fund raisers for music therapy for Big Bend Hospice and Alzheimer’s Project. Over the years, we have brought the finest bluegrass to the Tallahassee area, and also featuring our many talented local groups. Proudly, we’ve brought in Dailey and Vincent, Grasstowne, Claire Lynch Band, Missy Raines and the New Hip, Kenny and Amanda Smith, Flatt Lonesome, Band of Ruhks, Urban Hillbilly, and Rodney Dillard and the Walker Brothers. The Bradfordville Blues Club has been instrumental in providing a venue for bluegrass music.

I currently have five guitars, which I dearly love. Many have passed through my hands, and I have only one regret- selling a 1954 D-28 Tony purchased for Wyatt. Wyatt hand scalloped the braces, removed the finish from the back of the neck, and had a great reverse neck re-set done by Dana Bourgeois. I loved the set-up and sound. That guitar changed hands in Florida and Georgia five times, and now found its way back one mile from Wyatt in Damascus, Virginia. The guitar was sold with a hand-written note from Tony about its origin and characteristics.

I admire so many luthiers including but not limited to Randy Wood, Wayne Henderson, Spencer Strickland, Gerald Anderson, and many others. New on the scene in Tallahassee is a budding luthier Danny Goddard, along with his partner Debra Amesqua who makes superior hand-carved mandolins.

My grandfather and father smoked cigars and I remember at family gatherings, cigars were ever present. Having given up cigarettes, I got stressed out building our third house and purchased a factory made cigar at a convenience store. This was the beginning of a journey into premium cigars. From there it involved cigar catalogues, magazines, internet searches, a trip to Havana to celebrate my 50th birthday, visits to local cigar shops, and visits to every cigar shop in areas to which I traveled. Most memorable was a tour of the Partagas factory in Havana and smoking cigars made for public consumption in a local bodega on the Malecon. They were 20 cents apiece and were wonderful. Ry Cooder’s project, “Buena Vista Social Club,” inspired me to visit Cuba, smoke cigars, drink rhum and take in a lot of music. I did research on special education in Cuba as that was the purpose of my visit, as stated on my general license.

One day I decided I needed to learn how to make cigars. Fortunately I met Hector DeLeo in Tallahassee. Hector, then 90 years old, grew up in tobacco in Cuba and rolled in provincial factories there and in Tampa. After several lessons, I thought he had given up on me, since he told me to practice rolling and I would learn by doing. Six years later, I continue to make my own cigars using much of the equipment Hector gifted me, including a rolling desk he made and autographed with a picture of a leaf and his name and birth date.  I enjoy monogramming people’s initials onto my cigar by twisting a fine wrapper cutting and forming their initial(s). I especially enjoy giving my handmade cigars as gifts. I’ve been known to be a roller at charitable events. 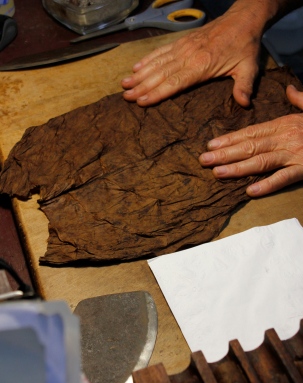